How We Saved $1022 Per Year on Our Cell Phone Bill

Our cell phone bill, before…

I used to think I was getting a good deal on my cell phone bill.  My husband and I were on a family plan that we shared with my brother and sister-in-law, and we had maxed out the number of people who could share a single family plan.  Plus, it had an ongoing employee discount from one of our employers. Coverage was good in our area, and we were getting unlimited talk, text, and data. How much better could it get?

I don’t remember exactly how it was advertised at the time, but I seem to remember we were signed up for some kind of “$100-a-month family plan” which made it sound like we were paying $25 each.  But that didn’t cover the line fees, the taxes, and everything else. When everything was said and done, we had been paying a total of $247.62 per month. So our half of the bill was $123.81, or $61.91 per line.  It felt a little high, but it didn’t seem unreasonable to me at the time. When I look at what we spent for the whole year back in 2014, we paid $1485.72 for two lines. Not bad, right?

At that time, my niece (my brother’s daughter) was getting to the age where they were thinking about getting her a cell phone.  But since we’d already maxed out the number of people who could share that plan, the four of us would need to split up. So my brother started doing some research and looking into some of the smaller services to see if he could get a better deal for his family.  He shared what he learned with me, and I was shocked.

He’d come across a cell service that used the same underlying carrier that we were already on (which meant the coverage would be just as good), but the prices were much more reasonable.  Essentially, we’d only pay for what we used. So if we talked more, we’d pay more. But more importantly, if we talked less (or texted less or used less data), we’d pay less. It just made sense — we shouldn’t have to pay for minutes, messages, and data that we didn’t need.  We were being smart and controlling our spending in other parts of our budget, and now it was time to get smart about controlling our spending on our cell phone bill.

After we switched to Ting

My brother and I both signed our families up for Ting.  And for my husband and me, in our first year with Ting, we paid a grand total of $463.72 for two lines.  Or $1022.00 less than we’d paid in the previous year.  And in case you think these numbers are too old to be accurate, our latest bill in March was $21.75 per line.  Obviously, your mileage may vary, but it’s certainly worth a look to see if you could save money by switching carriers, based on the way you actually use your cell phone.

How we minimize our bill

Now, just switching to Ting alone saved us quite a bit, but the key to getting the best value out of Ting was to be smart about what we were using.  Since Ting’s service is billed based on what you actually use, we started to look at what we actually *needed* to use, as opposed to minutes, messages, and data we were using just because.  Like streaming videos over LTE — rarely necessary for us.

My husband and I are often near WiFi that’s already being paid for, either at home, at work, and even at the public library.  Because of that, we have relatively little need to use minutes, messages, and data over a cell connection. We’ve made a habit of using WiFi to message people via Google Voice or iMessage.  Every time we do that, we’re not using (and not paying for!) SMS with our mobile service. Similarly, we use WiFi to call people via Google Voice or FaceTime, and again, we’re not paying for minutes then.  With data, we tend to keep data turned off on our phones until we actually need to use it when we’re out and about for things like maps or messaging people about something urgent. The bonus is that we’re less likely to hang out on our phones when we’re away from home simply to pass the time.  Since we think twice about whether to use data away from WiFi, we’re a bit more likely to choose to be present to what’s happening around us.

Just like in Goodbudget, Ting will let us know when we’re starting to use up the minutes, messages, or data that we’ve budgeted for ourselves.  We’ve set it up to send us alerts when we’re getting close. And if it’s getting to be more than we’re willing to spend, we can even cut ourselves off automatically (temporarily, of course).  And throughout the month, we can see exactly how our usage is going to add up to our final bill, rather than being surprised after the month is over. If it sounds like the kind of useful feedback you get from the Goodbudget app, that’s because it is! 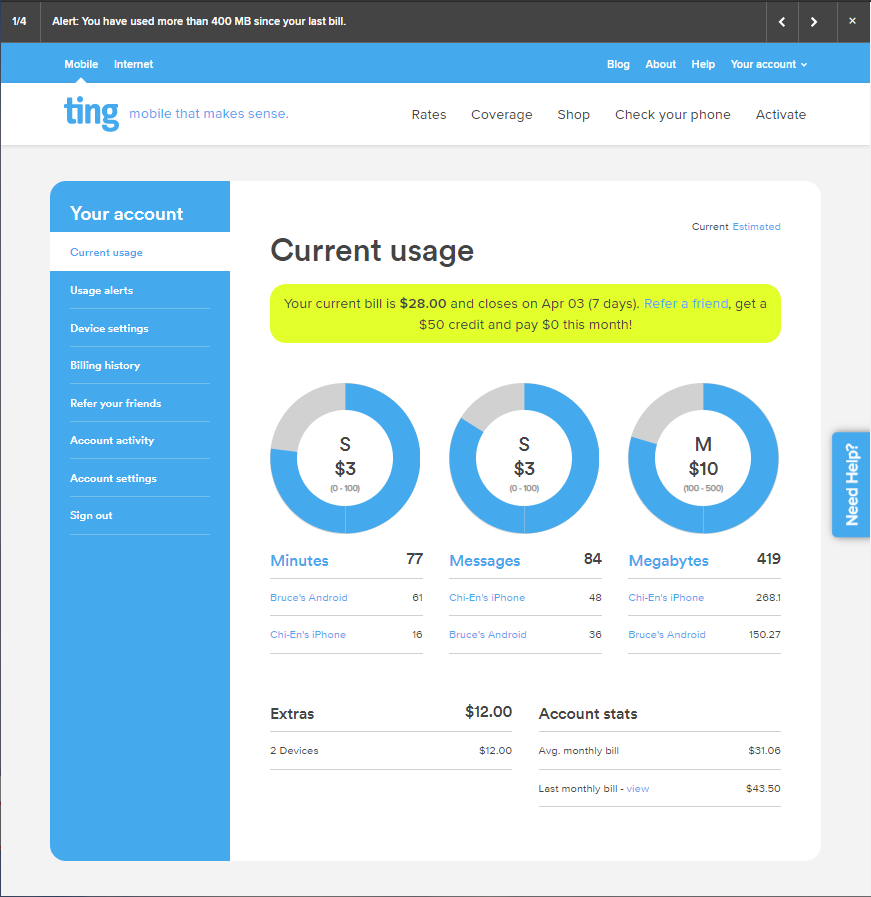 At this point, we don’t really check the Ting app all the time.  We’ve developed good habits, and that’s enough to keep our cell phone spending in control.  That’s just like how keeping closer tabs on the Goodbudget app early on helps you develop good spending habits all around — so you end up generally keeping your spending in check over time without thinking too hard about it.

How you can save

Take a look at your usage from your current carrier — how many minutes, messages, and megabytes you’ve actually been using.  And check to see if you’d save with Ting at their rates. If not, it didn’t hurt to check. And if you would, confirm that your phone is compatible with their service, which covers the United States.

As a personal customer of Ting for 5 years now, I can attest to having had a great experience with them, from the mobile service itself, to their customer service, to the team that’s putting this opportunity together for you.  Please do check them out and see if it might be a good choice for you.

PrevPreviousGB Bulletin: Helping Your Budget Weather the Storm
NextHow to Create a Lean Version of Your BudgetNext