Welcome back to GB 911. Great job creating your lean budget and reorganizing your expenses last time.

This phase is about adapting to where you are. You survived the “right now” in Stage 1. While you might have a little more breathing room now, there is still hard work ahead. Stage 2 is about helping you repair your finances by creating a plan to help you build an emergency fund or pay down debt. Both of these are great ways to lessen the severity of a financial emergency in the future.

You know when you’re ready for this stage when you’ve:

In Stage 1, we met Josh and Ashley. Before their emergency, they were doing just enough when it came to finances. Sure they were paying rent on time, but they didn’t have much savings and were living with paper-thin margins. They would have probably kept living that way indefinitely if it hadn’t been for their emergency.

Unfortunately, for them, disaster struck when Josh lost his job. This woke them up to just how close they’d been living to the edge — something that they’d been able to ignore before.

Though it wasn’t easy, they were able to survive, and they did so by quickly cutting expenses, creating a payment schedule, and backfilling some of their income. And while they do have a lot of work still ahead of them, they are ready to move on to the next part of their journey.

Let’s see how Josh and Ashley are doing now.

Over the last month, they’ve been receiving unemployment, which has been helping them survive their emergency. They also had a small bit of savings that they used to help make their first rent payment after Josh lost his job. Unemployment has helped them pay for things like utilities, food, and other essentials as they get back on their feet. Because they were able to adapt to their new financial situation, they know how they’re going to pay bills at least until Josh’s unemployment benefits end. They’ll decide how to plan for that in Stage 3.

Josh losing his job was the couple’s first big financial emergency as a married couple. It’s been eye-opening for them. Even more so, Josh is faced with the challenge of being his kids’ primary caregiver while also being a full-time job hunter. Those roles sometimes feel at odds to him, which is all the more reason to press on with their plan to repair their finances over the long haul.

With a young family, they decide they want to have a more secure financial picture. They want to be better prepared to handle potential emergencies that might happen in the future. Down the road, they’d like to consider buying a house, and saving up for their kids’ college tuition. They know they still have a lot of work to do before anything like that can happen, but it’s nice to dream. For now, they want to focus on repairing their finances and setting themselves up well to handle life’s twists and turns. Here are a few ways they can do that:

It would be great if they could work on both options, but with their limited budget, realistically they know they can only work on one or the other if they want to stay on top of their other payments. It’s a tough call, but after a long conversation Josh and Ashley decide that for them, the benefits of building an emergency fund outweigh the benefits of paying off their car a little faster. Here’s why:

Helpful tip: For others, paying off debt might be a better choice. It might make sense to pay off debt if…

To help them build this emergency fund, Josh and Ashley will continue working on making other short-term changes to help them save money so they can stash as much as they can in their Emergency Fund Envelope. Making this new budget will be a little easier than last time since they know how much Josh earns each month from unemployment. Here’s what their new budget looks like: 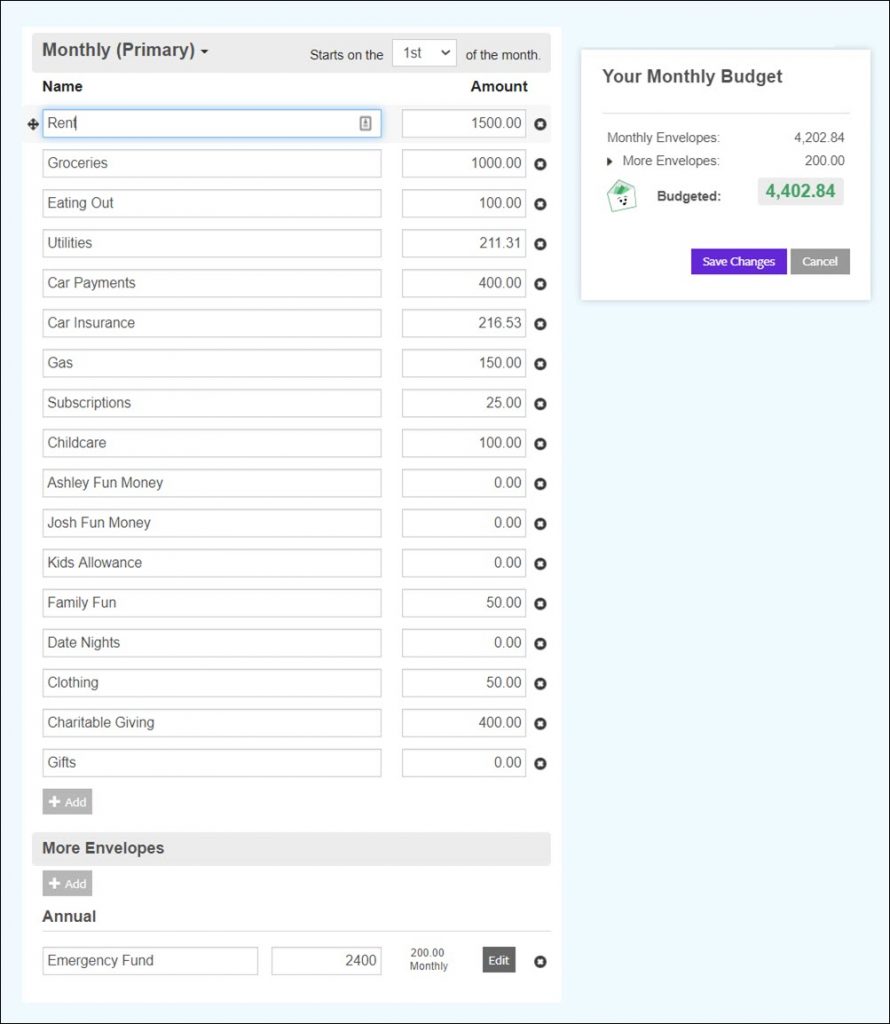 They’ll continue to work on small habit changes to help them stick to this further slimmed down budget. They know it won’t be easy, but they also know it’s not impossible.

Thanks for joining us for the first half of Stage 2. You’ve seen how Josh and Ashley and their family are managing their finances since their emergency. You’ve seen them make lots of quick changes to help themselves get back on track. Because of those changes, they’ve been able to start working on some goals to repair their finances so they can thrive in the future.

Next time, you’ll learn how you can adapt to your situation so that you can continue working on your money goals and thrive later on.

Until then, let us know