How One Family Survived a Job Loss

This stage is all about surviving the here and now. To do that, you’ll need to start by acknowledging the situation you’re in so that you can develop a plan that makes sure you can pay for the essentials, like food and bills.

You know you’re in this stage when you’ve:

You’ll be out of this stage when you’ve found a way to pay for food, shelter, and other essentials for about a month.

Now, the road ahead might be long, tough, and tiring, but it’s not impossible. Often, when financial emergencies strike, all we hope for is to find a way through the storm so we can see the sunshine on the other side.

A financial emergency is just about to strike our fictional family. Throughout the rest of this course, you’ll see how they survive, adapt and even thrive through their crisis.

Meet the family. They have two kids, Ava (8) and William (5). Ashley works full-time and Josh part-time. When Josh isn’t at work, he takes care of the kids. He loves spending time with them, and appreciates the extra time at home to nurture and care for his family.

With steady incomes, Josh and Ashley have always paid their bills on time, so they’ve never felt the need to follow a set budget. They’re aware of their bank account balances and make sure they always have enough to pay their monthly bills, like rent and their car payment, and have a little leftover for fun and leisure. But even though they always pay their bills on time, the downside to not following a set budget is that they’re living with a paper-thin margin and don’t have a one-month cushion to fall back on if an emergency were to happen. But because they’ve been fine so far, they haven’t stressed about it too much.

Unfortunately for them, an emergency strikes. Josh loses his job and now they’re being confronted with just how narrow their margins have been. His job loss is a major financial blow. Even though they’ve lost income, bills still need to be paid, they still need to eat, and they still need to feed the kids. They’ll have to find a way to survive this unsettling emergency.

The crux of their emergency is they only have a small bit of savings. Because of that, they know they need to make some major shifts so that they can buy food for the rest of the month and pay rent when the new month starts. Without family around to help support them, they know the only way they’ll be able to get through this is if they take a serious look at how they’ve been spending and make some quick changes to survive their current emergency. They decide to start by taking a look at their bank accounts to see how they’ve been spending over the last 30 days. They hope that by seeing how they’re currently spending, they’ll find some quick areas where they can pull back. Here’s how they’ve been spending over the last 30 days. 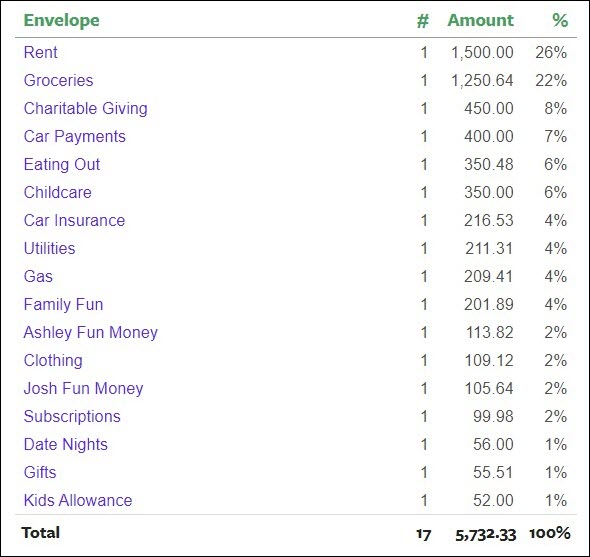 It’s a little surprising just how much they’ve been spending, but at least now they have an accurate picture. They also add up their income to see what they’re bringing in. Immediately, they see that they’re spending almost exactly the same amount as they’re bringing in, and it makes sense why they couldn’t save or build an emergency fund. They know they need to start tracking their spending more carefully so they can make sure they’re living within their means.

What they need is a budget that helps them spend less than they’re earning. To help them make ends meet while Josh looks for another job, they plan for Josh to apply for unemployment benefits. Even with those benefits, they’ll have less income overall to work with each month, so they really have to pare down their spending. Here’s what they come up with: 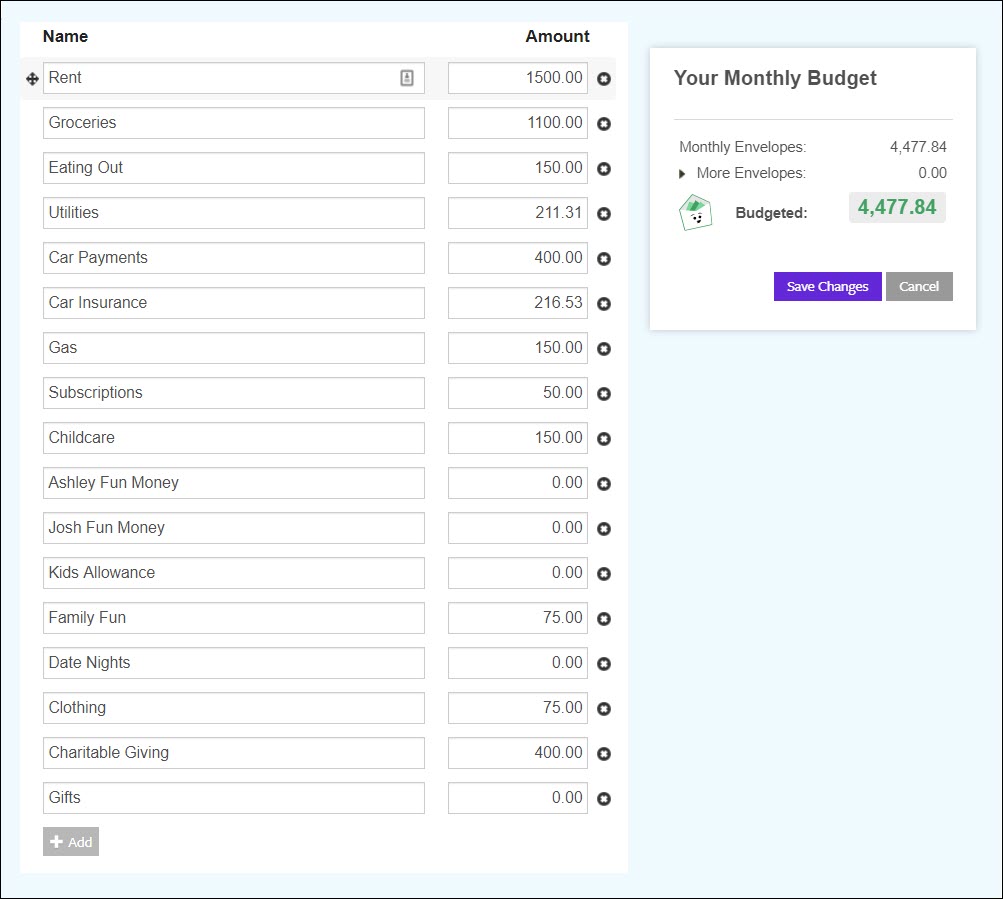 As you can see from their new budget, Josh and Ashley have decided to reduce and cut out a lot of things from their budgets, and they plan to continue this way until they’re back on their feet. But they know that things won’t be easy. This is a major shift from how they’re used to spending.

Now that they’ve created a spending plan, the next step is to figure out how they’ll pay for bills that will be due soon. Ashley won’t be getting another paycheck for two weeks, and Josh’s unemployment benefits will take some time to kick in. Based on their checking account balances, they don’t have enough to pay for food for the family and for the bills that are coming due soon. So they take a look at their savings. They have a small amount of savings and then a bit of money set aside for a future vacation. While the total amount is small, it looks like it should be enough to cover food and rent when the new month hits. That’s a relief! They’ll at least be able to keep a roof over their heads. They decide they’ll make a plan to set up late payments with their utilities companies, which they’ll pay when Ashley receives her next paycheck. They’ll feel a little more relief when those unemployment benefits kick in.

With some quick action, Josh and Ashley feel like they’re going to be okay for now, but they’re not out of the woods yet. A lot of hard work and planning still lies ahead for them. Fortunately, this was a huge wakeup call for them. Being confronted with where they’re actually at financially is a turning point for them, and they’re ready to put in the work to make themselves financially secure for the first time. Long-term, they hope to get to a place where they can be prepared for future emergencies, and you’ll see how they reach that point in the coming weeks. But, for now, they’re just relieved to be able to  provide for their family.

17 thoughts on “How One Family Survived a Job Loss”